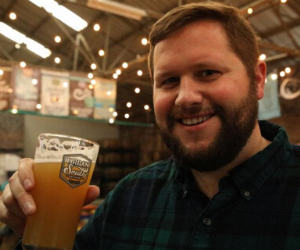 New Orleans native Kyle Huling enrolled in Loyola’s M.B.A program in 2006, the spring semester after Hurricane Katrina. During this time, he worked full-time as a sales representative for Southern Eagle beer distributors. “My days would be spent visiting grocery and convenience stores, and my nights were spent in Miller Hall,” says Kyle. During the course of his studies, Kyle took a number of classes from Dr. Michael Pearson, the Chase/Francis C. Doyle Distinguished Professor of Marketing Emeritus, whose “fun-loving approach to marketing, promotion, and branding” influences Urban South’s marketing and branding today.  In 2006, one of Kyle’s course assignments—a presentation on employee retention programs—led directly to him being promoted to national accounts manager at Southern Eagle.

After graduating in 2010, Kyle continued in his role as national accounts manager at Southern Eagle for a year before being named brand manager for all of the import and craft beers in Southern Eagle’s product line. He then took the leading role in creating the company’s new department devoted to marketing local and regional craft beers.

After two years of careful business planning, Kyle and his business partner Jacob Landry realized their dream of opening their own local brewery in 2016. Urban South began with two beers—Charming Wit and Holy Roller IPA—sold in local grocery stores and in a large, rustic taproom on Tchoupitoulas Street. They then expanded sales to Baton Rouge and the Northshore and released a third beer—Paradise Park. Urban South opened a second brewery and taproom in Houston in February.